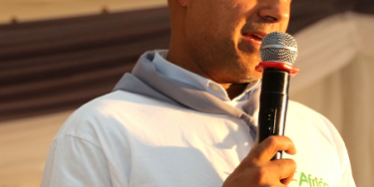 KIGALI: When humans forget about the past and the unpleasant parts of history, they can easily become complacent and when this happens,dangerous ideologies can easily take root. This was the message from Africa Improved
Foods CEO, Amar Ali to the company’s staff members. The message was delivered in light of the numerous commemoration activities to mark 23 years since the Genocide against Tutsi happened.

“When times are good, people look forward. It’s the nature of the human mind to move towards the pleasant and away from the unpleasant. History moves in cycles and in particular, when people forget about the past, about the bad parts of
history, they can become complacent and slowly, without them really noticing, dangerous ideologies can take root,” Amar said. Recently, AIF staff broke away from the company’s daily busy routine and dedicated a whole afternoon to converge
and remember those who perished during the 1994 Genocide against the Tutsi.

This particular activity was held at the plant premises situated in the Kigali Special Economic Zone and was graced by David Mwesigwa from CNLG (National Commission for the Fight against Genocide) and Lt.Col. John Ndakebuka from Gasabo
district who in their remarks highlighted the need for relentless vigilance towards revisionism and denial.

“We have concentrated on the youth with the view to protect them from falling prey to those who harbor the genocide ideology, to make them good citizens and involve them in the fight against genocide ideology and denial,” Ndakebuka said.

Amedee Mukasa, a genocide survivor and employee of AIF gave an emotional testimony of what transpired during 1994 from a personal account. AIF’s CEO Amar Ali conceded that it was not possible for him to comprehend the sorts of events that
happened during the Genocide against the Tutsi before highlighting the need to stay vigilant.

“Hatred is the starting point for dehumanization and Genocidal ideologies. So the fight starts within our minds, and working on our minds, both intellectually and spiritually, is a duty both to ourselves and to the world. But we also need
to confront people who espouse such ideologies. We can’t keep silent. And this starts in the workplace,”Amar Ali said.

“At AIF, we want to be a flagship for Rwanda, not only in what we build and the products we produce, but also the way we treat each other. Everybody is a human being first, and should be treated as such, irrespective of gender, race, religion,
tribe or any other categorization. That way, we make AIF a more pleasant and effective place to work, free of discrimination, hatred and unequal treatment,” he added.

According to Amar Ali, AIF’s existence is testimony that there is progress made in Rwanda during the last 23 years, and the company intends to light the way for others to follow.

“By focusing on our mission of providing high quality, locally-sourced, nutritious foods, we help the people of Rwanda, and beyond, to be healthier and to fulfill their potential. The opportunities to develop Rwanda, and to develop ourselves,
are huge within AIF. As I’ve said before, I personally feel very lucky to be involved in something like this, and I hope you do too,” he added.