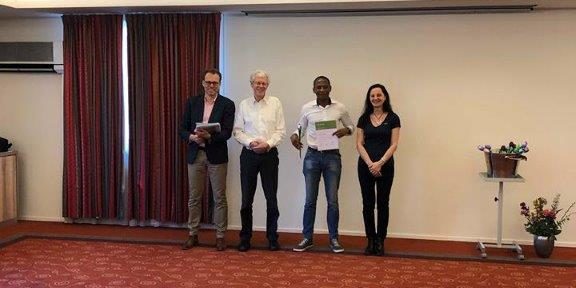 Meet Maurice Tuyisenge, who as per his words is very grateful to have been part of an 18-day training in Netherlands. The training which started on 8th March and ended on 30th March 2019 took place at Wageningen University & Research, saw 42 participants from all over the world unite to understand the motivation behind the Governance and food safety in international food chain.

Maurice is the Documentation Officer in the Quality Department at Africa Improved Foods. His expertise lies in FSSC22000 Food Safety System.

At first when Mr. Tuyisenge applied for the course, he knew he was going to expound more on what he knew about food safety but when he got there, he got more than what he anticipated. In addition to gaining what he signed up for, he learnt the overarching concept behind the food laws in EU and other countries.

The standards are set or adopted by CODEX alimentarus which is the central part of the Joint FAO/WHO Food Standards Programme and was established by FAO and WHO to protect consumer health and promote fair practices in food trade and for Maurice who has a penchant for understanding how to eradicate aflatoxin, his hope was for stakeholders in Rwanda to sit together and each take their part to control the aflatoxin problem as it is the most lethal of the Mycotoxins as expounded in the training they had. Aflatoxin is a highly toxic, cancer-causing toxin that contaminates agricultural crops such as maize (corn), peanuts etc.

Over the course of the training period, Maurice went on to learn the importance of the food laws and good regulation and implementation of the EU food laws in countries. Maurice also had an opportunity to lead a team of his colleagues as a part of the course to practice the audit of local Netherlands producer of cheese against HACCP and PRP Good practice (EU Harmonized system).

Aflatoxin in EU is on the red flag, whereby rejected crops/cereals is properly disposed unlike some instances in Africa where it goes back to the market and sold to unsuspecting buyers. Meaning there is much awareness that needs to go around for farmers and consumers to understand the effects of aflatoxins in the human body.

To Rwandans, Maurice’s message is, ‘Your health is important. Whenever you taste a bitter grain be it from your maize or peanut/groundnuts just stop eating it and throw it away.’

Since at AIF we produce maize flour products, Maurice’s main intention was to learn how he could use the knowledge, skills and connections he got from the training and implement them at AIF using the strategy of the stakeholder’s collaboration approach. He mentioned that Rwanda, like most countries in Africa has challenges to export cereals and crops (i.e.: Peanuts) to EU reasons being the history of high aflatoxin.

According to Maurice, the training was sponsored by the Government of the Netherlands program called NUFFIC OPK programme which offers individual scholarships to mid-career professionals in countries/ organization that has relationship with the Netherlands and the course must help the organization develop its capacity. This programme is jointly financed by the ministry and Dutch higher education institutions. All the participants except him were Government officials.

One of the curricular activities was that they join a group to work on projects that could be used back home. The projects were then put on assessment to determine a project worthy of funding. Out of the 6 topics (shared by participant as one their organization facing challenges) selected one of them was the topic shared by Maurice, 6 groups were formed, only 2 got selected and Maurice’s group was one of them. Unluckily for him, being from the private sector (less influence to the stakeholders involved in aflatoxin on the country level) his project idea was taken on by an official from Egypt government (biggest peanuts exporter to EU) while the other winner of the project went to Cambodia.

Maurice came back to Rwanda and had many souvenirs from the country including cheese he cured along with his colleagues. He has since kept in touch with those colleagues and hopes when the project they came up with gets funded and is successful, he will visit Egypt where the project will take place.

But for now, he is going to use what he learned and implement it with the help of AIF and hopefully stakeholders who make up the feeding system of Rwanda.

Wageningen University & Research is a Dutch university that specializes in the theme: ‘healthy food and living environment’.